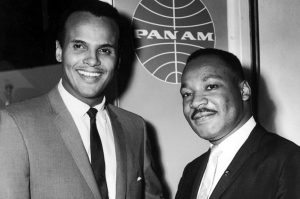 Harry Belafonte speaks on his last conversation between him and MLK.

Midway through the Civil Rights movement, Dr. Martin Luther King Jr. realized that the struggle for integration would ultimately become a struggle for economic rights. I remember the last time we were together, at my home, shortly before he was murdered. He seemed quite agitated and preoccupied, and I asked him what the problem was. “I’ve come upon something that disturbs me deeply,” he said. “We have fought hard and long for integration, as I believe we should have, and I know that we will win. But I’ve come to believe we’re integrating into a burning house.”

That statement took me aback. It was the last thing I would have expected to hear, considering the nature of our struggle, and I asked him what he meant. “I’m afraid that America may be losing what moral vision she may have had,” he answered. “And I’m afraid that even as we integrate, we are walking into a place that does not understand that this nation needs to be deeply concerned with the plight of the poor and disenfranchised. Until we commit ourselves to ensuring that the underclass is given justice and opportunity, we will continue to perpetuate the anger and violence that tears at the soul of this nation.”

“I fear, I am integrating my people into a burning house.”

Dr. King said the above statement to Harry Belafonte in a conversation they had before his death. Belafonte startled at the statement said to him “What should we do?” Dr. King told him that we “Become the firemen, Let us not stand by and let the house burn.” 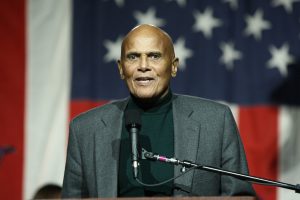 An icon of popular American music, Harry Belafonte was born in Harlem in 1927, and lived from age eight to fifteen in Jamaica, where he was influenced by the calypso and folk music he would later popularize in the 1950s. An active voice in the fight for civil rights, Belafonte introduced the first integrated television program in 1960 with his Emmy Award-winning “Tonight with Belafonte” and became the first black television producer at the same time. In 1985, he earned a Grammy Award for producing the We Are the World album. He was named UNICEF’s goodwill ambassador in 1987.