Gloria Steinem: How the CIA Used Feminism to Destabilize Society 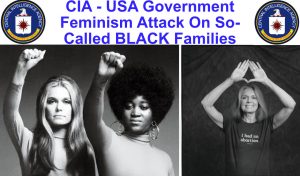 „In the 1960’s, the elite media invented second-wave feminism as part of the elite agenda to dismantle civilization and create a New World Order.“

Since writing these words last week, I have discovered that before she became a feminist leader, Gloria Steinem worked for the CIA spying on Marxist students in Europe and disrupting their meetings. She became a media darling due to her CIA connections. MS Magazine, which she edited for many years was indirectly funded by the CIA.

Steinem has tried to suppress this information, unearthed in the 1970’s by a radical feminist group called „Red Stockings.“ In 1979, Steinem and her powerful CIA-connected friends, Katharine Graham of the Washington Post and Ford Foundation President Franklin Thomas prevented Random House from publishing it in „Feminist Revolution.“ Nevertheless the story appeared in the „Village Voice“ on May 21, 1979.

Steinem has always pretended that she had been a student radical. „When I was in college, it was the McCarthy era,“ she told Susan Mitchell in 1997, „and that made me a Marxist.“ (Icons, Saints and Divas: Intimate Conversations with Women who Changed the World 1997. p 130) Her bio-blurb in June 1973 MS. Magazine states: „Gloria Steinem has been a freelance writer all her professional life. Ms magazine is her first full-time salaried job.“

Not true. Raised in an impoverished, dysfunctional family in Toledo Ohio, Steinem somehow managed to attend elite Smith College, Betty Friedan’s alma mater. After graduating in 1955, Steinem received a „Chester Bowles Student Fellowship“ to study in India. Curiously, an Internet search reveals that this fellowship has no existence apart from Gloria Steinem. No one else has received it.

In 1958, Steinem was recruited by CIA’s Cord Meyers recruited by to direct an „informal group of activists“ called the „Independent Research Service.“ This was part of Meyer’s „Congress for Cultural Freedom,“ which created magazines like „Encounter“ and „Partisan Review“ to promote a left-liberal chic to oppose Marxism. Steinem, attended Communist-sponsored youth festivals in Europe, published a newspaper, reported on other participants, and helped to provoke riots.

One of Steinem’s CIA colleagues was Clay Felker. In the early 1960’s, he became an editor at Esquire and published articles by Steinem which established her as a leading voice for women’s lib. In 1968, as publisher of New York Magazine, he hired her as a contributing editor, and then editor of Ms. Magazine in 1971. Warner Communications put up almost all the money although it only took 25% of the stock. Ms. Magazine’s first publisher was Elizabeth Forsling Harris, a CIA-connected PR executive who planned John Kennedy’s Dallas motorcade route. Despite its anti establishment image, MS magazine attracted advertising from the cream of corporate America. It published ads for ITT at the same time as women political prisoners in Chile were being tortured by Pinochet, after a coup inspired by the US conglomerate and the CIA.

Our main misconception about the CIA is that it serves US interests. In fact, it has always been the instrument of a dynastic international banking and oil elite (Rothschild, Rockefeller, Morgan) coordinated by the Royal Institute for Internal Affairs in London and their US branch, the Council for Foreign Relations. It was established and peopled by blue bloods from the New York banking establishment and graduates of Yale University’s secret pagan „Skull and Bones“ society. Our current President, his father and grandfather fit this profile.

The agenda of this international cabal is to degrade the institutions and values of the United States in order to integrate it into a global state that it will direct through the United Nations. In its 1947 Founding Charter, the CIA is prohibited from engaging in domestic activities. However this has never stopped it from waging a psychological war on the American people. The domestic counterpart of the „Congress for Cultural Freedom“ was the „American Committee for Cultural Freedom.“ Using foundations as conduits, the CIA controlled intellectual discourse in the 1950’s and 1960’s, and I believe continues to do so today. In „The Cultural Cold War,“ Francis Stonor Saunders estimates that a thousand books were produced under the imprint of a variety of commercial and university presses, with covert subsidies.

The CIA’s „Project Mockingbird“ involved the direct infiltration of the corporate media, a process that often included direct takeover of major news outlets. „By the early 1950’s,“ writes Deborah Davis, in her book „Katherine the Great,“ the CIA owned respected members of the New York Times, Newsweek, CBS and other communication vehicles, plus stringers, four to six hundred in all.“ In 1982 the CIA admitted that reporters on the CIA payroll have acted as case officers to agents in the field. Philip Graham, publisher of the Washington Post, who ran the operation until his „suicide“ in 1963, boasted that „you could get a journalist cheaper than a good call girl, for a couple of hundred dollars a month.“

I was born in 1949. Idealists in my parent’s generation were disillusioned when the Communist dream of universal brotherhood turned out to be a shill for a brutal despotism. My own generation may discover that our best instincts have also been manipulated and exploited. There is evidence that the 60’s drug counter culture, the civil rights movement, and anti-war movement, like feminism, were CIA directed. For example, the CIA has admitted setting up the (National Student Association as a front in 1947 http://www.cia-on-campus.org/nsa/nsa2.html). In the early 1950’s the NSA opposed the attempts of the House Un American Activities Committee to root out Communist spies. According to Phil Agee Jr., NSA officers participated in the activities of SNCC, the militant civil rights group, and Students for a Democratic Society, a radical peace group.

According to Mark Riebling, the CIA also may have used Timothy Leary. Certainly the agency distributed LSD to Leary and other opinion makers in the 1960s. Leary made a generation of Americans turn away from active participation in society and seek fulfillment „within.“ In another example of the CIA’s use of drugs to interfere in domestic politics, Gary Webb describes how in the 1980’s, the CIA flooded Black ghettos with cocaine.

I won’t attempt to analyze the CIA’s motivation except to suggest what they have in common: They demoralized, alienated and divided Americans. The elite operates by fostering division and conflict in the world. Thus, we don’t realize who the real enemy is. For the same reason, the CIA and elite foundations also fund the diversity and multicultural movements.

Feminism has done the most damage. There is no more fundamental yet delicate relationship in society than male and female. On it depends the family, the red blood cell of society. Nobody with the interests of society at heart would try to divide men and women. Yet the lie that men have exploited women has become the official orthodoxy.

Man loves woman. His first instinct is to nurture („husband“) and see her thrive. When a woman is happy, she is beautiful. Sure, some men are abusive. But the vast majority have supported and guided their families for millennium.

Feminists relentlessly advance the idea that our inherent male and female characteristics, crucial to our development as human beings, are mere „stereotypes.“ This is a vicious calumny on all heterosexuals, 95% of the population. Talk about hate! Yet it is taught to children in elementary schools! It is echoed in the media. Lesbians like Rosie O’Donnell are advanced as role models.

All of this is calculated to create personal confusion and sow chaos among heterosexuals. As a result, millions of American males are emasculated and divorced from their relationship to family (the world and the future.) The American woman has been hoodwinked into investing herself in a mundane career instead of the timeless love of her husband and children. Many women have become temperamentally unfit to be wives and mothers. People, who are isolated and alone, stunted and love-starved, are easy to fool and manipulate. Without the healthy influence of two loving parents, so are their children.

Feminism is a grotesque fraud perpetrated on society by its governing elite. It is designed to weaken the American social and cultural fabric in order to introduce a friendly fascist New World Order. Its advocates are sanctimonious charlatans who have grown rich and powerful from it. They include a whole class of liars and moral cripples who work for the elite in various capacities: government, education and the media. These imposters ought to be exposed and ridiculed.

Women’s oppression is a lie. Sex roles were never as rigid as feminists would have us believe. My mother had a successful business in the 1950’s importing watchstraps from Switzerland. When my father’s income increased, she was content to quit and concentrate on the children. Women were free to pursue careers if they wanted to. The difference was that their role as wife and mother was understood, and socially validated, as it should be.

Until Gloria Steinem and the CIA came along.

Henry Makow is the author of A Long Way to go for a Date. He received his Ph.D. in English Literature from the University of Toronto. He welcomes your feedback and ideas at henry@henrymakow.com.